Apply for your free citizenship today! 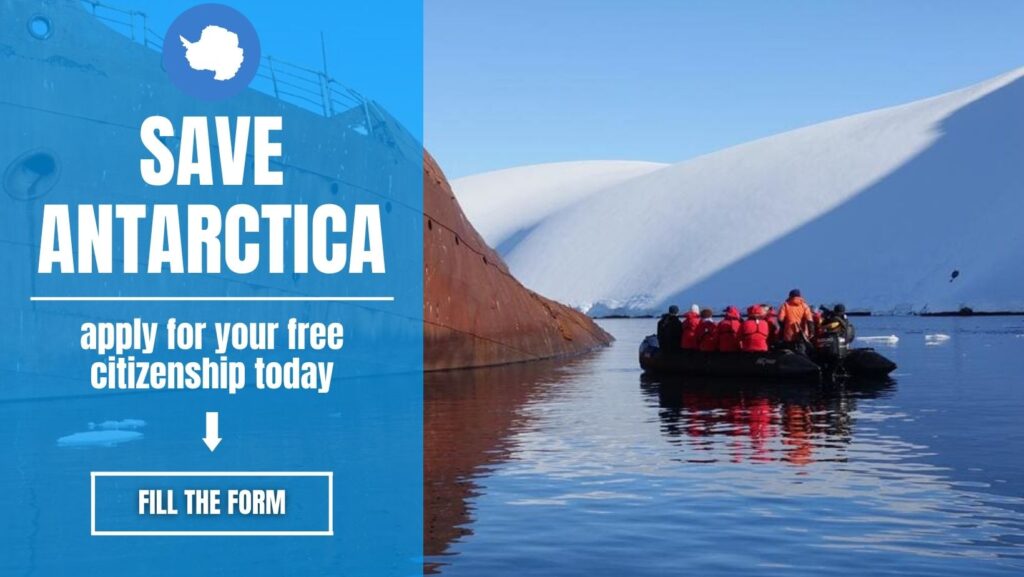 Become a citizen of Antarctica and become its spokesperson

Become a citizen of Antarctica and defend the Antarctic continent against the threats of climate change.

As a citizen of Antarctica, you can be a voice for the consequences of global warming, which are also affecting the South Pole. You will also be able to demand adequate protection of the Antarctic ecosystem. Here’s how.

Sea ice levels are decreasing with each passing year. If the phenomenon persists for several years, the gradual melting could lead to a rise in sea level. This would have dramatic consequences, as 40% of humanity lives in coastal areas. Several cities and towns located on the shores of the sea would be erased from the map.

Antarctica is a huge continent, but it has no resident population. It is estimated that less than 1,000 people live in Antarctica year-round.

As a result, Antarctica lacks individuals to represent it and to communicate and interpret its needs to the world. Hence, a great silence is all that comes out of Antarctica.

The general public knows very little about the Antarctic continent. What they do know is that Antarctica is practically a type of protectorate of the great powers, for which they have guaranteed themselves equal rights over this territory by signing the Antarctic Treaty. To date, this treaty has ensured that none of the great powers assumed a hegemonic position in the exploitation of natural resources.

One might think that the apparent balance of power would guarantee relative stability over the management of the continent.

But those who understand politics know well that sudden economic and social changes in some countries can alter pre-existing conditions and upset old balances that were thought to be eternal.

Become a citizen of Antarctica

If this were to happen, and one or several parts of Antarctica were to prevail over the others, we could witness the greatest plundering of natural resources in history.

But, above all, we would be witnessing the worst environmental catastrophe that would alter the planet’s ecosystem forever.

To avoid this terrible scenario and to raise public awareness of the problem and understand its implications, we have decided to launch the “Save Antarctica, become an Antarctic citizen” campaign.

All those who believe that it is absolutely necessary to prevent Antarctica from becoming the victim of an ecological tragedy will now have the opportunity to make this known to the world through a very significant gesture of support, by applying to become part of this mythical continent and asking to be granted the right of citizenship.

Citizenship is offered on an equal basis by the Principalities that make up the Antarctic Lands Organization ALO.

The Principalities offer citizenship free of charge in exchange for a single condition that is to accept the 10 Fundamental Principles that they have given themselves, among which the priority for environmental protection, respect for human rights and peace among peoples.

The aim of this initiative is to create an Antarctic “population” that will actively take a stand in defense of the Antarctic ecosystem.

The citizens of Antarctica will become an integral part of the process, to raise global awareness of the continent’s environmental needs and to ensure the sustainability and protection of the environment, both flora and fauna.

Antarctic citizens will be able to establish groups in their respective countries and organize events to encourage the involvement of the authorities and citizens of each country.